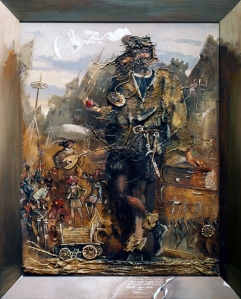 Most of us feel that terrorism has put a serious crimp in our experience of freedom here in the “homeland.” But what it may have done is inadvertently expose the pretense of freedom under which we have been laboring for these many years, perhaps centuries. Perhaps it has succeeded in outing the underlying motive beneath our politics, its maneuverings and behind-the-scenes deal making, whether with big business, lobbyists or private contractors. Maybe it has betrayed the prime motivation beneath all political systems – power, its control, and aggrandizement.

Well, I imagine we will soon begin to see things more clearly. The full force and impact of the Obama presidency is on its way to the light of day, straight through the corridors of darkness and the possible instantiation of a domestic “thought police.”

Of course, we can thank W and his troupe for starting us down this path, with passage of legislation allowing more flexible wire tapping rules and other “homeland security” measures intended to infringe upon our so-called civil liberties. But Obama is doing more than his fair share in escalating the endeavor.

After having given his nod to fines and jail time for citizen non-compliance with health-care reform legislation, Obama has tipped his hand to the next challenge, making sure all of us citizens believe what we are told by his administration, and do as we are asked by those in power.

I believe it was George Orwell who first raised the specter of the “thought police” in his novel, 1984. In Orwell’s horrifying proleptic vision, it was the job of this agency to uncover and punish thought-crimes using a host of covert psychological and surveillance techniques to find and eliminate members of society whose very thoughts were challenging to the controlling hegemony.

Well, Obama is about to make Orwell’s vision a reality for the homeland in 2010. His pick to head the Office of Information and Regulatory Affairs (OIRA), Dr. Cass Sunstein, Harvard Law Professor, proposed such an agency in a 2008 article published in The Journal of Political Philosophy.

Professor Sunstein, affectionately called (but not to his face) “Mr. Sunshine,” wrote in “Conspiracy Theories: Causes and Cures,” that such theories pose “real risks to the government’s antiterrorism policies,” stemming as they do from a “crippled epistemology.” What he means by this is that conspiracy theorists have limited or poor information. His cure is to infiltrate these ill-advised groups with independent undercover agents (reporting to and paid by the administration) to correct the knowledge base of their disparate, renegade followers. As the article states:

“Government agents (and their allies) might enter chat rooms, online social networks, or even real-space groups and attempt to undermine percolating conspiracy theories by raising doubts about their factual premises, causal logic or implications for political action.”[20]

In this manner, he hopes to undermine the credibility and internal coherence of these heterodox groups. It is worth noting that Sunny, a Harvard Law Professor, has already been criticized publicly as a potentate for implementing censorship, online and elsewhere.  It’s Soviet style propaganda, plain and simple folks.  And Mr. Sunshine has been in the news as recently as April and May of this year.  As the April article suggests:

Reading between the lines of Sunstein’s research paper, I believe it’s “justified” to ask whether the Obama administration took Sunstein’s “main policy idea” and put it into practice. If so, then We the People may likely pay for bureaucrats to engage in “counterspeech and marshall arguments” against us. We may pay, directly or indirectly, for “credible private parties to engage in counterspeech” (FactCheck, Media Matters, Snopes, public relations firms, progressive operatives who appear on CNN, FOX, CNBC, MSNBC and call into talk radio show, minions who write op-eds and letters to the editor, or “obots” who comment on blogs). Or we may merely pay for informal communication with such parties, encouraging them to “help.” Did we pay for the secret meetings wherein someone organized media groups like Journo-list? We certainly paid for those organizing phone conferences between administration staffers and the NEA, which aimed to recruit artists to “help” promote the Obama agenda.

And this brings us full-circle to last week’s post, reminding us again about the commodification of social policy, and the marketing of the State’s overarching agenda to the populace.  Stand aside China, America is in lock step, or is that goose-step, with your sentiments about Google and censorship. Whether it is direct or “inverted” (Chris Hedges), the creeping and covert totalitarianism of our state belies the fascist tendencies of all states. Nietzsche was correct; there is no truth and no freedom where there is political society.

State is the coldest of all cold monsters. Coldly it tells lies…in all tongues of good and evil;…state, where the slow suicide of all is called ‘life.’ [Kaufmann, 160-1]

We are moving slowly, but definitively into a police state. If you refuse to buy health insurance or if you even think the wrong thoughts, you are an enemy of the state. My friends, by writing this article, I am already labeled a heretic. I am already singled out as a potential problem to be solved or silenced.

Sunstein is now proposing a method of officially dealing with what he calls “dangerous” ideas, by claiming that the government could, “ban conspiracy theorizing,” or “impose some kind of tax, financial or otherwise, on those who disseminate such theories”. In short, Sunstein wants strong, official censorship, backed by threats of legal punishment, for those whose ideas he views as “dangerous” …

The siren song is getting louder as we approach the Scylla and Charybdis of our own historic destiny; do not be fooled by its enticements. We are doomed as long as there is someone telling us what to believe and how to live our lives: someone who knows nothing of us personally – our suffering, our longing, our simple pleasures and our needs. This is especially so when all the maneuvering is behind the scenes, part of the scaffolding holding up the Spectacle. We are all heterodox thinkers my friends; one and all, conspiracy theorists (or worse: terrorists) in Sunny’s view.  The time to reflect is over. The time to make your voices heard is at hand.  Or should we just retreat to the toilet and put a gun in our mouth?

75 Responses to Full Metal Jacket: The Coldest Of Cold Monsters