Indian Summer in Siberia and an ‘Arab Spring’ in New York 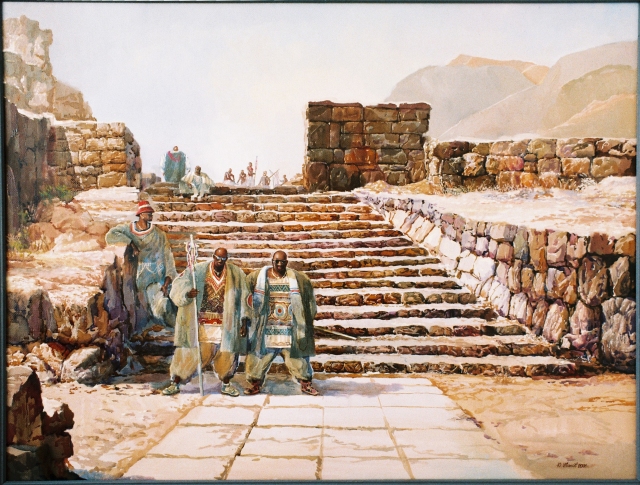 "These Are Our Steps" - Yuri Ivanov

“There’s something happening here, but what it is ain’t exactly clear”

There is a strange irony in the representations and, perhaps, the self-perception of the “Occupy Wall Street” demonstrations now entering their fourth week, with perhaps 1,000 arrests already logged in New York City alone.  And the movement seems to be spreading like wild-fire, with sympathetic actions flaring nationwide, from California to Maine. Apparently, the organizers see their occupation in the image of those revolutionary movements that have taken place recently across MENA, the so-called the “Arab Spring” uprisings.  You know, like the one in Egypt, where the military has now taken control of the regime (only without Mubarak) and is savagely subduing any workers who protest.  You may recall the lovefest a few months back, when the Egyptian people and the army were one.  But, what did they expect?

However, according to reports from our own trenchant media and the less-than-transparent politicians of Empire, those Arab uprisings were born of a deep-seated desire of the second-worlders to have what we have here in the West, in America – on Wall Street, in Hollywood, New York, Miami and elsewhere; as we were told, they wanted our freedom, our capitalism, and our vaunted democracy.  So, what then does the “Occupy Wall Street” crowd really want.  I mean, we already are the proud owners of high-stakes casino capitalism, democracy managed by the likes of Koch Brothers, Monsanto, General Electric, and Goldman Sachs, and the consumer freedom to buy any brand of underwear or toothpaste one could desire or imagine.

I understand that the OWS folks want change; that much is obvious.  Like others before them, they would like to take politics back from the control of big business and greedy bankers; but is that a realistic objective?  I ask, is it realistic to expect the owners to let the inmates run the asylum; no less, to run an industrialized economy dependent upon cheap oil and maintaining a lifestyle that long ago led us onto a oneway road to ecological disaster, a lifestyle inherently incompatible with planetary survival?  In any event, do the disaffected really think they can wrest control from the money-makers and the money-lenders, and their paid servants in DC?  And what good would it do if they could?  What did it do for the Egyptians?  How will it end for the Libyans?  But maybe, the American contingent does not want regime change; after all, we are already a democracy, right?

So what do the disaffected here really want?  Of course, they want a solution to their problems and to the gross economic inequalities they experience daily.  They want to fix what is broken with the system so they can once again claim their piece of the pie, find their place in the sun, and recover their share of the American dream.  Quite simply, they appear to want an economic fix.  And with the Unions now joining in the mix, that could be articulated rather quickly and clearly.  But an economic fix, even if it feels good now, is not what is needed, I’m afraid; at least not from where I’m standing. The only “solution” that gets to the heart of the matter (as I see it) is at least a partial dissolution of the architecture and associated scaffolding of industrial civilization; in other words, a dismantling of the very Curriculum that has brought us to the brink. Anything shy of that goal will only lead to further abuse of the remaining species, continued degradation of the biosphere, and almost certain global destruction, including elimination of the majority, if not all, of its human inhabitants.

But, I am afraid such deconstruction is not what the OWS crowd seeks.  It appears they have a more aligned, more modest, politically correct agenda.  In fact, they too have enjoyed the fruits of this system, when provided. They just want that the system works for them, rather than against them.  They want more time to pick those fruits in Big Daddy’s Orchard, and they want more revenue from sale of the fruits.  Yet, they fail to see the brick wall at the end of the tunnel; focusing instead on a more comfortable ride, in a nicer cabin, for the price they are paying.

But let’s get real, shall we? Wall Street and its multiple addictions is only the tip of the iceberg.  It is the financial engine of empire, and this American Empire is the apex of Western civilization – its hegemony spread far and wide over the globe.  And, therein lies the heart of our problem. The challenge facing us rests fundamentally with the logic of the system itself — with the science, math, law, politics, and, yes, the religion(s) of the Curriculum of the West.  But, for some reason, I don’t think that’s what the OWS folks are going for.

And we all know what this Curriculum is about. First and foremost, it demands the separation of subject and object – ontologically, epistemologically, psychologically, and physically. Then it requires a rigid objectification of nature, both human and non-human. Followed by the articulation of scientific laws within a very specific logistic format, by means of which nature, both human and non-human, can be manipulated, modified, and controlled. Then comes identification and extraction of those objectified resources, both human and non-human, to be used (up) in their application to the productive capacities of empire and its forward global march. Whatever it is that the OWS crowd thinks it wants, it is NOT the end of empire, not the collapse of Western civilization or its Curriculum.  At least not yet; and not consciously!

On the other hand, there could be more brewing here than currently meets the public eye or even the self-understanding of the OWS disaffected.  It seems as though a greater sense of ennui and despair is setting in across the Homeland.  Students around the USA have now joined in the demonstrations, confirming the wide-ranging experience of alienation presently haunting this country, coupled with a recognition of the charade that the system represents, and maybe, just maybe, disillusionment with the institutions that define modern reality.

Every student in school right now is looking at the prospect of zero employment, insane debts to go to school, and entering into a workforce with no jobs. These are kids from every walk of life who are doing exactly what they’ve been told to do in order to succeed and realizing that it’s all a bunch of bullshit.

And while the self-understanding of this collective anxiety still appears focused on pressing economic and financial issues, a pre-conscious undertone may be just coalescing around general disaffection with the entire agenda of the Western curriculum.

Listen, folks.  It is not a big leap of faith to go from despair over the direction of Empire, to disaffection with the system itself.  And, I would wager that, perhaps soon, people will realize that the agenda of our civilization, in all of its diverse incarnations – whether represented politically by autocratic rule in MENA, socialist democracies across Europe, or corporatism (a.k.a. democratic capitalism) in here in the Homeland – that it is all of a piece, cut from the same cloth, and that it all adds up to the same thing: control exercised by entrenched, institutional hierarchies.

And the further revelation, that industrial civilization is itself the problem, may not be far behind.  After all, the soulless objectification of nature, both human and non-human, and the wanton manipulation of those “natures” for the entertainment and benefit of a few, cannot stand for long. In addition to the convenient, but erroneous, objectification of what we call outward nature, the idea of a toxic human nature has been artfully crafted as well, by legislators, high priests, and other specialists over the millennia.  Such artifices create and maintain the illusion that rationalized, hierarchic institutions (and all they entail) are both necessary and sufficient to tame these twin beasts (natural and human).

I submit that one’s personal sense of alienation, and that of the disaffected around this nation and the world, is born of the emptiness resulting from these fallacious objectifications. Nature outside my flesh is not an alien object confronting me, nor is there some evil nature lurking within me, both awaiting proper manipulation and control by the authorities – our scientists, legislators, and priests.  Remember, the “war of all against all” that so worried Thomas Hobbes, never occurred in pre-civilized prehistory.  Nor was there an all-out war against the environment that those “primitives” inhabited. But wars on every front are here now; they are part of what we created in our systematic rush to progress and material comfort.  Of course, that still leaves unanswered the big question: what led pre-civilized humanity down this road in the first instance.  That question may be a bit more challenging to answer, I’m afraid.

At this juncture, I would simply note that as we continue to move through diverse shows of political theatre here in the Homeland, one thing is assured.  America will see more policing, more homeland security, more domestic military intervention, and covert surveillance; more disaffection and alienation; more terrorism, sanctioned torture, corporate corruption, and wars of resource acquisition; more media whitewashing and political propaganda to keep us well trained and under the thumb of those controlling the capital.  The fascism inherent in our system, in every political hierarchy, even those claiming to be democratic, eventually shows its teeth when the sledding gets rough.  Ours will be no different.  Just ask the disaffected in New York and elsewhere across the land.