Conversations On A Country Path 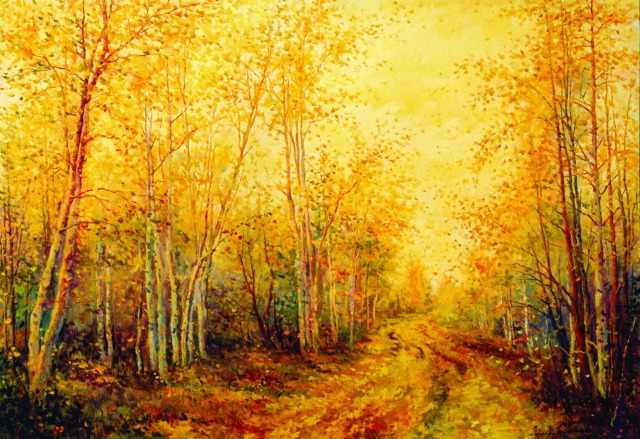 I was at the dacha for two days this week, helping Anatoly (my father-in-law) get the garden ready for winter’s anticipated arrival, the air already foretelling the north winds imminent presence.  This morning we walked up the path to a cliff by the forest’s edge, overlooking the Ob River less than thirty meters below. The sun was shining intensely in a perfectly cobalt-blue autumn Siberian sky, speaking a language all its own, as its light played and danced gently off the nearly placid surface of the waters below. An occasional breeze was faintly blowing, talking to the silver birch and aspen trees, as their now golden leaves carried the conversation back into the wind. On our way back down, a lonesome crow was alerting his absent mates to our approach, a small snake conscientiously crossing before us on the path, while the honeybees greeted our arrival back at the dacha with a resounding hum.  Even the gnats refused us peace.

Yet, now, even here, the occasional whirr of an internal-combustion engine clanking underneath the hood of a passing auto interrupts the intricacy of nature’s language, and the richness of its silences. Why is it humans believe that we alone talk, that we alone have language and can communicate?  Why do we consider the sounds of nature to be mere noise; and why do we think we have the right to drown out nature’s sometimes quiet, sometimes angry, messages with our own manmade sounds – jet engines, locomotives, autos, radios, televisions, and various other devices that whirr, whine, grind, clank, pound, hammer, screech, or explode?  Ours is a culture cluttered with noise, manufactured noise, mechanical noise, electronic noise, and, yes, verbal noise.  When I leave the city behind, with its trams, trolleys, busses, trucks, and cars, its bells, whistles, and alarms, and the incessant chatter of the crowds moving or just milling around, and arrive at the entrance to the dacha community, nature’s voice is clearly audible and nearly palpable.  The colors of the leaves that have turned, and those trees that are just beginning to change, provide a stunning but ever-changing backdrop to this subtle conversation among sky, water, earth, and forest, and the creatures living there in its midst.

Have we lost or perhaps buried our feral capacity to hear these alternate voices, the subtle conversations that greet us on a country path when we have left behind the confines and safety of the home, the city walls, and the highways? We seem to think we can continue to ignore this call of the wild and the voices of nature, drowning them out with our pumps, jack-hammers, engines, explosives, drills, derricks, wells, and chemical mixtures, and all the accompanying machinations that force nature to stand and deliver, as we struggle desperately to sate our hunger for more energy and more of this ‘good life’.  It seems we hear only the voices of other humans, and usually we listen only to those telling us what to believe and how to live our lives, our leaders and their paid pitchmen. And we, in turn, respond most directly to those marketers who ply us with the greatest promises, the newest toys and other goodies, things to obscure our own growing sense of alienation and anonymity in an increasingly atomized world of their making. What is globalization? It is just another word for the hypnosis of mass anonymity, the loss of our physical pulse, as we live now, faceless, in a world of steel, concrete and electronic impulses.

And when the subtle voices of nature abound, why is our first impulse to stick something in our ears – a headset, a cell-phone, or the ear-buds from our newest personal music machine. I am as guilty as anyone is in this regard. The temptation at times, overpowering.  What are we afraid of hearing in this natural silence?  What frightens us in the voice of nature?

Modern consciousness seems to be most comfortable inhabiting the purely rational and linguistic space constructed and refined over centuries by the curriculum of the West – civilization’s central mission.  All the while, we continue to ignore or demean the pre-rational, pre-thematic subjectivity of our own bodies, and the meanings that are pre-consciously constituted through the natural participation of my senses with the earthly sensuous.  It always is and remains the animate and animated body-subject intertwined with the world-as-lived-by-the-body; my flesh, the flesh of the world.  We participate the world, much as my eyes participate the emergence of the rainbow on the horizon: alter my physical position, and the rainbow changes its terminal location or disappears altogether.

Yet back in the city, the talking and the distractions continue unabated. Muzak plays tirelessly in the background of the café, over the din of human chatter, while the noise of cars and trucks rumbles on outside incessantly. The news outlets speak verbally and visually: The Huffington Post, Al Jazeera, TRN, Fox, CNBC, MSNBC, and a host of others vying for our attention – dead bodies in Mexico, Chinese farmers in protest, the battle for Libya, Israeli spies.  We hear claims and counterclaims, words filling up the airwaves and our ears, until the noise level is just too unbearable, too overwhelming. The mind clicks off.  And it remains off, as this civilization continues its freefall into collapse taking much of the planet and its biodiversity with it.  Yet most folks still remain anaesthetized.

All the while, the “curriculum of the West” keeps grinding relentlessly forward. Our politicians, scientists and their financiers demanding increased conformity to a worldview they have established and a world they are desperate to maintain; and we remain enthralled by their PR whores out on the front lines selling the next storybook ending. We listen dutifully to their strange tales, literally fascinated with that one about the evil inhering in human nature, and how only they can guarantee ‘law and order’ to keep it at bay, to keep it from overtaking the good of their perfectly civil society.  And we obey unquestioningly; even our own leaders’ misdeeds excused as a necessary tool to ensure civil harmony and peace.  And we never, not even once, stop to question their primary and founding assumption – the one about human nature.

Yet, while the noise-level of our culture keeps ratcheting-up, what is an ordinary person to do to maintain some sanity, some sense of equilibrium within this growing cacophony of human noise and its demands?  This is my question for you, my readers.  I want to hear your ideas about overcoming the ever mounting and unrelenting noise (demands) of civilized life so that we may listen again to nature and find a better way to live after the collapse.

128 Responses to Conversations On A Country Path