The Curriculum of the West 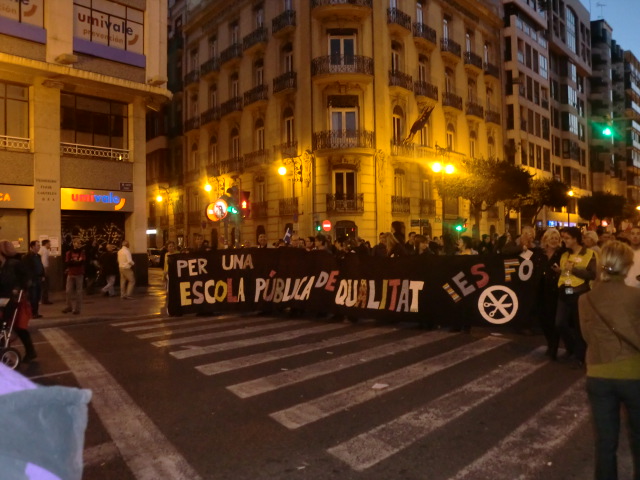 It is Thursday, March 29th.  A General Strike has been called for all of Spain.  It is 7:45 AM in the city of Tarragona.  My wife Anna and I arrived here last night by car from Barcelona where crowds were already gathering. The streets of Tarragona are also filling this college town with students. Even with police close by, the protesters stop traffic, beat on cars, and generally tie up the workings of the city and its inhabitants. Perhaps where you collect strangers together in urban settings, the common voice speaks loudest through demonstrated chaos and an otherwise muted ambivalence towards the law.

With a doctorate in religious studies from the University of Virginia and a master’s degree from the University of Chicago, Sandy had a ten-year academic career, with appointments at University of Virginia and the Colorado School of Mines. He spent the next twenty years in executive ranks at several of America’s largest international firms, including Computer Sciences Corporation, Ernst & Young, and General Electric. He has traveled extensively throughout Europe and North America, as well as parts of Eurasia and Africa. For the past five years Sandy has been living in Western Siberia with his wife and young child, teaching at the Pedagogical University and the Altai Institute for Law and Economics in Barnaul, Russia. Published works include VERONIKA: The Siberian's Tale (a novel), (Islands Press 2011) Apocalypse Of The Barbarians: Inquisitions On Empire (Islands Press, 2010), The Recovery of Ecstasy: Notebooks From Siberia (Booksurge, 2009), Recollective Resolve: A Phenomenological Understanding of Time and Myth (Mercer University Press, 1987), Ethical Decisionmaking Styles (Addison-Wesley Press, 1986), and Gandhi in the Postmodern Age: Issues in War and Peace (CSM Press,1984).
View all posts by kulturcritic →
This entry was posted in Anarchy, Aristotle, Austerity, Body-politic, capitalism, civilization, collapse, Corporate State, cultural crisis, democracy, Financial Crisis, geopolitics, global collapse, Hedges, language, Obama, Occupy Wall Street, Protest, rationality, Riots, social contract, State, syllogism and tagged capitalism, Corporate State, Financial Crisis, geopolitics, Occupy Wall Street, Protest, syllogism. Bookmark the permalink.

1 Response to The Curriculum of the West